Archangel Michael and the Swords of Light

All the Selenite Swords of Light are directly connected with Archangel Michael, the Guardian Overlord of the Angelic Host, Elemental Kingdom and Humanity. Archangel Michael has guided the evolution 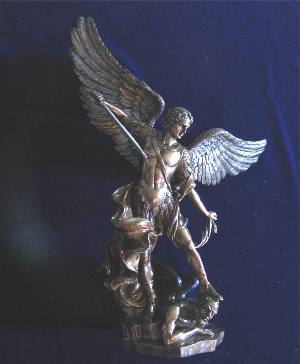 of the Swords of Light, and they are charged with his subtle healing energy. We see archangel Michael depicted in Christian art holding a sword (also with scales) to reinforce the concept of truth, purity, equanimity, and the justness revealed in the light of Christ.

Each sword contains a number of pictures of Archangel Michael.
"Be still, my children! Bow thine heads, that the Lord of the way make known unto you that have been chosen for a service in this period when there is the need of that spirit being made manifest in the earth, that the way may be known to those that seek the Light! For the glory of the Father will be made manifest through you that are faithful unto the calling wherein thou hast been called! Ye that have named the Name make known in thy daily walks of life, in the little acts of the lessons that have been built in thine own experience, through those associations of self in meditation and prayer, that His way may be known among men: for He calls all— whosoever will may come— and He stands at the door of thine own conscience, that ye may be aware that the scepter has not departed from Israel, nor have his ways been in vain: for today, will ye harken, the way is open - I Michael, call on thee!

Archangel Michael will not return home until the final Angelic Being is freed, the last man is redeemed and the last Elemental returned to its perfect state. This is the love of Lord Michael.

“The opportunity to experience the power and magic of this light for your self is here.”

What Our Customers Say

Creates a deep internal sense of power and well being.

“Holding the Archangel Michael Sword while meditating creates an enhanced light body around my physical body, blocking any foreign energies outside of myself.  I have two swords each has specific sacred ash tuned to our specific energy signatures and creates a deep internal sense of power and well being.”

It serves to continually activate all the crystal energies present.

“The Archangel Michael Sword has presence on my altar. It serves to continually activate all the crystal energies present. I have used the sword to focus and energize and feel in the process a quickening and increasing awareness of the I AM. Blessings and gratitude.”

“Invoking the Archangel Michael while passing the sword through my auras gives a sense of profound peace while connecting to creation and energizing my soul. It energizes my crystals, particularly the aquamarine and magnifies the power of my other sacred medicine objects. These swords are the perfect healing tool.”